What does a period drama like Bridgerton set in the early 19th century have in common with Indian fashion? Quite a lot, actually.

Bridgerton's costume designer is the brilliant Ellen Mirojnick, whose costume team ultimately created about 7,500 pieces for the cast over five months. Among other references, Ms. Mirojnick took inspiration from drawings and paintings of the era, as well as Dior dresses from the 1940s and beyond. She and her team put a scandalous and modern spin on the costumes that were aspirational and yet still felt fitting for the period (source).

Lady Daphne Bridgerton and the Duke of Hastings, Credit: Netflix

The story of India's influence on much of what inspired Bridgerton's wardrobe begins well before the Bridgerton years (the Regency Period), which would have been around 1813. Soon after the Europeans sailed to India in search of spices in the 15th century, textiles became one of India's most important exports. Indian manufacturers had ways of transforming fabrics like cotton into breathable and colorful creations. These manufacturers found ways to even adapt their textiles to local demand in Southeast Asia, Africa, and Europe.

By the 17th century, European cities like Paris and London were importing so much Indian fabric that European textile owners lobbied the government to ban Indian textiles. The French monarchy responded in a major way - both by banning imports of dyed cotton and banning the local merchants from making dyed cotton. They thought that the Indian products were so good that if the French tried to replicate it, it would not look as good in comparison, thereby encouraging more demand for dyed Indian textiles.

Tons of Indian textiles were still smuggled into the country during that ban. Yes, they were that good. The French government took these transgressions so seriously that their citizens were fined as much as the cost of their house, brought to court, and more.

The French government eventually switched its tactic and not only allowed imports of Indian textiles, but also allow the French to imitate them. It took a lot of effort for them to get there, but they eventually did. Specifically, there was a factory owner named Christophe-Philippe Oberkampf who got the point where he could make a high quality enough imitation of Indian textiles that he sold them as "Indian." Talk about appropriation. He transitioned away from that after some time, but it was not a much more noble strategy. What he then focused on was making new designs on cheaper fabrics. His methods were part of the fuel for the idea of clothing as a temporary trend and seasonal releases in fashion. So today's constant need to keep up with seasons and changing trends came about as a response to the fact that Indian cloth was so good, the French had to find an ultimately inferior way to mimic it (source). 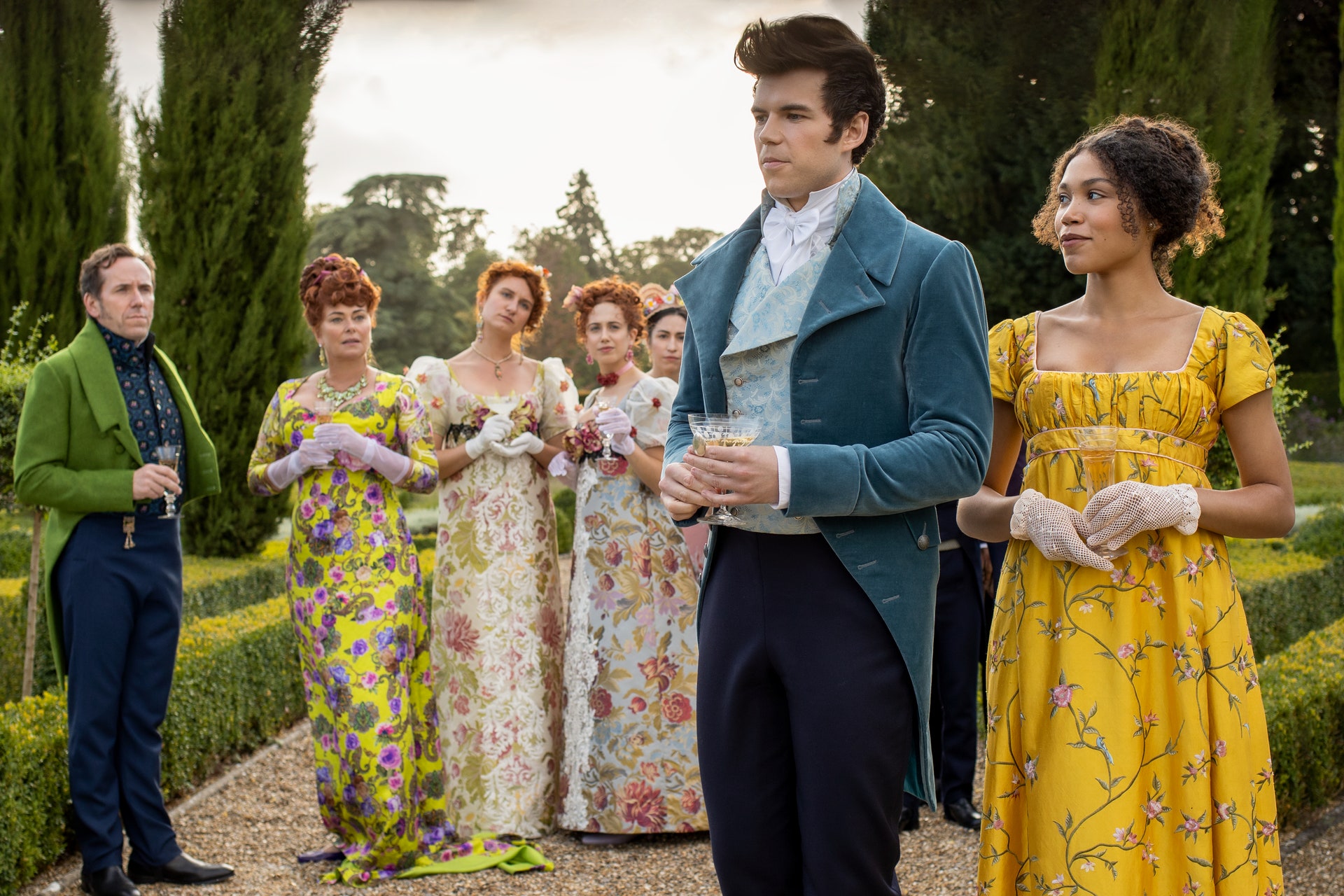 Now a lot of this was a more French-specific story, but French fashion heavily influenced British fashion. A real life version of the Bridgertons would have used some of the fabrics from the local French textiles industry that Oberkampf spurred.

A more British-centric story is around muslin. Muslin fabric was introduced from India in the late 18th century, likely only a few decades before the Bridgerton Regency period. It could be used to make a much softer, less restricting style of dress and became highly favored. The British East India Company would make it a major import into the 19th century. Ms. Mirojnick specified that they did not use muslin for Bridgerton's dresses (source) because it did not provide the drama and fall they were looking for, but its attributes still inspired many of the silhouettes of the era.

There were likely many other influences from Indian fashion, including the embroideries and patterns used in the fabrics from the show, but it becomes more difficult to discern direct influences once Europeans found their own ways to "draw inspiration from" (read: appropriate) Indian textiles and make their own versions. The world may never know, but we hope to continue sharing what we know about the influence that South Asia has had and continues to have on the world.

Chikankari: An embroidery fit for royalty

Sani is all about moving confidently at the intersection of fashion and function.So we decided to take a silky fabric and make it into a cool bandana style, which originated in South Asia and the Middle East in the 17th century. We combined it with a filter from NC State University's Wilson College of Textiles and consulted with experts there during development.
Read More